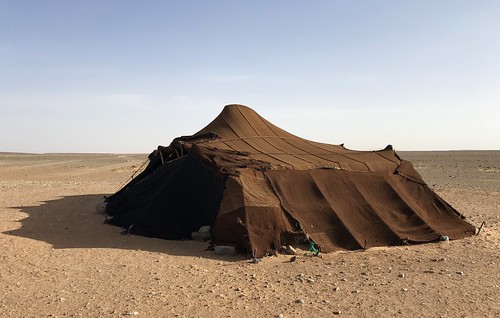 Erg Chebbi (Arabic: عرق الشبي‎‎) is one of Morocco’s two Saharan ergs – large seas of dunes formed by wind-blown sand. The other is Erg Chigaga near M’hamid.

The dunes of Erg Chebbi reach a height of up to 150 meters in places and altogether it spans an area of 50 kilometers from north to south and up to 5–10 kilometers from east to west lining the Algerian border.[1]
The nearest sizable town is Erfoud, about 60 kilometers further north. One other city is Rissani, around 40 kilometers from Merzouga, and from the 8th to the 14th century there was a separate kingdom, known as Sijilmassa, which was prosperous owing to former caravan routes.
Although rainfall is very brief and uncommon,[2] in 2006 flooding adjacent to the dunes destroyed many buildings and killed three people.
Tourism[edit]
Merzouga The local tourist center, is located near the edge of the dunes. A number of companies offer camel trips from Merzouga and into the desert, taking tourists on overnight trips several kilometres into the erg, which is enough to bring the village out of sight.
During the warmest part of the year, Moroccans come to Erg Chebbi to be buried neck-deep in the hot sand for a few minutes at a time. This is considered to be a treatment for rheumatism.

Berbers of the Sahara
The lowland desert Berbers are generally nomadic. Small groups consisting of medium or large extended families are found all across the Sahara. Desert Berbers live a very different lifestyle compared to their mountain brethren. Being nomadic, they move constantly across national borders. International boundary laws mean little to them as they follow the natural seasonal cycle of forage grazing, water and shelter. These people are born to move under the open sky and across unlimited horizons with their flocks of sheep, goats, and camels. Their wandering nomadic lifestyle is central to their way of life. Families subsist on goat milk, bread, dates, barley, couscous, mint tea, and butchered sheep, goats and sometimes camels. Their timetable is according to the sun, moon and the rare occurrence of rain.

Today’s Sahara Berber nomads live in the most inhospitable regions of Africa and often endure hardships including lack of water. With the increasing problem of global warming, their habitat is becoming more harsh and extreme. As water sources dry up and water tables drop, finding sufficient water for their herds is an increasing problem.

Over the past 40 years, persistent drought has forced many Berbers to give up their wandering way of life. To survive, some have settled in villages where they cultivate land to ensure a steady food supply that is less vulnerable to a dry climate. These people have had to make many adjustments to their lifestyle including their homes. Their houses used to be tents, but are now built with mud bricks. Their diet has changed from one of meat, milk and cheese to one with more grains and vegetables. One advantage of the new lifestyle is that many children, including girls, are sent to school. This in turn opens new avenues of opportunity for educated Berbers.

The mobility of those who choose to continue a traditional nomadic lifestyle has been greatly reduced by the development of National Parks where nomad families and their herds are often forbidden to live or graze their animals. The creation of national borders and governments that forbid border crossings and access to traditional grazing lands threatens the welfare of the animals that these people depend upon. The animals die due to lack of water and pasture which in turn destroys the nomadic way of life. In light of new restrictions, nomads have little choice but to overexploit what land is left available to them in order for the families and their herds to survive.

The deterioration of the environment is often attributed to the nomadic populations. Some cast blame on the Berber shepherds for increased desertification due to over grazing by their herds. However the ancient, traditional management of Berber lands is based on very strict codes of usage and knowledge of the earth, including fauna and flora, which preserves the environment. Families raised their herds, moving with them, in patterns that normally avoid depleting pastures beyond their ability to recover. Land has been the tool that enabled tribal survival, as it provided grazing lands for their livestock, and produced the crops that the Berbers cultivated. Many Berbers are semi or fully nomadic. These tribes follow the same migratory patterns every year, and have been doing so for centuries. Land is also important because it is attached to traditions and culture. For these reasons, to the Berbers, the loss of land equals the loss of autonomy, identity, and traditions. It is only when tribes are allowed to resume uninhibited travel to traditional water and food sources regardless of national borders or Parks can the ancient way of life continue for the nomadic Berbers.